Once a month at Valdez Hall in downtown Fresno, the United States Citizenship and Immigration Services (USCIS) hold a Citizenship Naturalization Ceremony where anywhere from 200 to 1200 new Americans take their oaths of allegiance. On March 11, 2017, the Fresno County Public Library hosted a Citizenship Ceremony at the Orange Cove Branch. 20 new citizens took their oaths, including 14 minors, receiving their citizenship through their parents, and 6 naturalized adults. 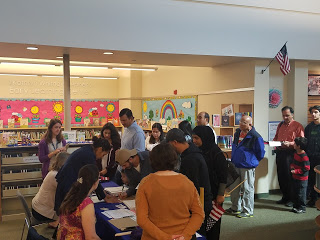 Registration began the moment the library doors opened. Everyone has to check in. They hand over their Permanent Resident Card and take care of some other paperwork business with USCIS. This day is something that naturalized citizens work towards for years. Sometimes they have to learn a second language. They also have to take a civics test, a reading test and a writing test during their final interview with USCIS. On top of all that, it is not inexpensive to file for naturalization. While it's a little bit easier for the children who obtain citizenship through their parents, it does require paperwork, a USCIS interview and a fee. Becoming a U.S. Citizen is no easy task.

During registration, the Library offered some activities for everyone to participate in while they waited for the ceremony to begin. At one station, Children's Librarian Allie offered a Dreamcatcher craft where kids could create their very own dreamcatcher. 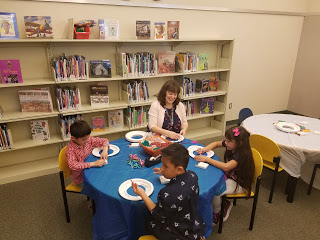 For the older kids, Teen Programming Librarian, Misha provided a ceramic tile craft. The crafters chose a tile and a pattern, symbol, design or picture to graft to the tile. Here's a picture of the kids making the tiles and of the finished products! 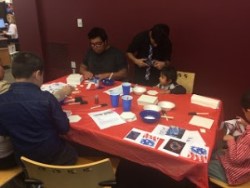 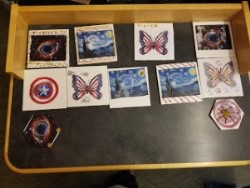 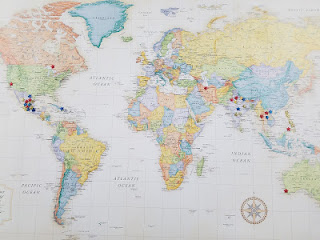 One of the coolest things about the citizenship
ceremonies is WoW!'s world map. We bring out that map to all of our citizenship ceremonies and have every new citizen designate their home country with a small star. It's a great visual representation of the amazing diversity of Fresno County!


Right around noon, the ceremony began. After the Star Spangled Banner, WoW! Librarian Michelle gave some opening remarks on behalf of the library. She spoke about her experiences working with the immigrant communities in Fresno County and how their journeys have inspired her. Then it was time for two other FCPL librarians to provide some fun. Allie Marques, the Children's Librarian for the Blossom Trail Cluster, provided a mini-story time where she read Bark, George for everyone to enjoy. Misha Hacke, the county-wide Teen Programming Librarian, gave a short book talk about Cinder. 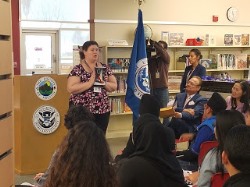 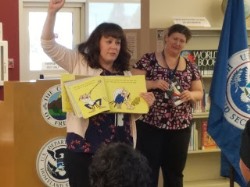 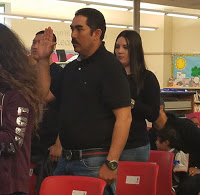 Sofia Flores, USCIS Officer, presented the candidates for citizenship and Lynn Feldman, the Fresno Field Office Director, administered the Oath of Allegiance. At that moment, the candidates for citizen automatically become citizens. Everyone recited the Pledge of Allegiance and then listened to our guest speaker, Victor Lopez, the Mayor of Orange Cove. Finally, the new citizens were presented with their Certificates of Citizenship. Each new citizen was called up, one at a time, where Sofia presented them with their certificates; then they were received by Lynn Feldman, Michelle Gordon and Victor Lopez. 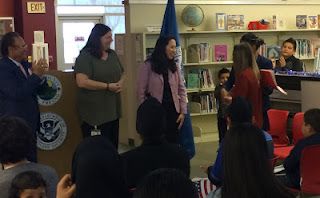 It was a great day of celebration. FCPL is proud to partner with USCIS to hose these small citizenship ceremonies and looks forward to future ceremonies.
Posted by Jessica Hall at 11:04 AM 9 comments:

Digibus at the Truck Wash

Have you ever wondered where trucks and RVs go for a wash?  We found out this week! 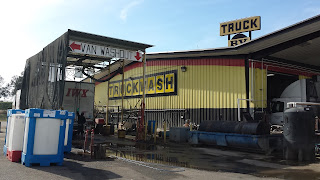 On Tuesday, March 7, in preparation for a Digibus Univision commercial, Shannon and Annika took the bus to the Fresno Truck Wash to get cleaned up. 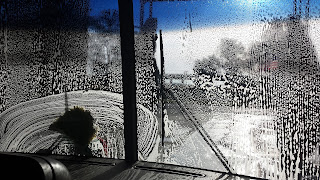 The freshly washed Digibus will be rolling through Firebaugh March 13-17.  The following week it will be in Kerman (March 20-24).  Hop on any time between 10 am-12 pm or 1-3 pm to work on job readiness skills or use the free WiFi.  You can find the full schedule here.

Posted by Unknown at 9:16 AM No comments:

Email ThisBlogThis!Share to TwitterShare to FacebookShare to Pinterest
Labels: Digibus 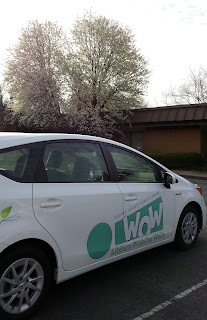 On Saturday, March 4, WoW! librarian Annika Janzen attended the Knowledge is Power 2017 conference.  This event was held by the advocacy group Parent Voices, in partnership with Central Valley Children’s Services Network.  Parent Voices advocates for children and parents at the state level and provides resources for parents of young children.  Speakers at the event included representatives from the Fresno County Office of Education, the United Farm Worker's Foundation of Fresno, Central California Legal Services, as well as the Children's Services Network and the Library. 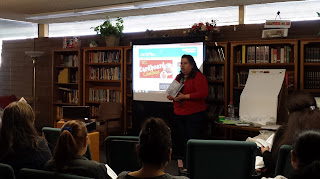 Deborah Bernal from Literacy Services presented a workshop for parents on encouraging early literacy skills for their children.  The Families for Literacy program, offered through FCPL, provides activities and education for parents and caregivers of young children aged 0-5.  One of the aims of the program is to get kids ready for kindergarten, and there are so many opportunities to get young children ready for school before they even start reading or speaking.  Annika signed people up for library cards and spread the word about the library’s upcoming Spring Storytime and Craft events, as well as other helpful library resources.

Posted by Unknown at 2:42 PM No comments: