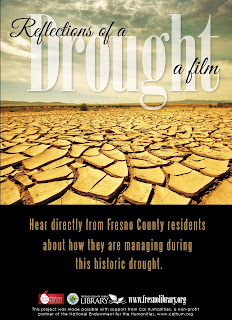 A four-year drought has brought pain and anger to the San Joaquin Valley. Not only are the solutions unclear, even the questions are hazy.


Jonathan Waltmire of the WoW! Library team is project director for a new video documentary, Reflections of a Drought: a film, which shows the issues through the words of people in Fresno County dealing with the drought’s effects. The film was shown at the Woodward Park, Selma, and Mendota branches of the Fresno County Public Library.

Funded by a competitive California Humanities grant underwritten by the National Endowment for the Humanities, the California Documentary Project seeks to understand the people and history of the state. Waltmire and videographer/editor Steve Thao interviewed ten people, from civic officials to farmers to homeowners, cutting six hours of raw footage into a 21-minute exploration of how agriculture, communities, and the public are dealing with the lack of water.
Waltmire says his biggest challenge was “trying to find a story that was balanced between urban and rural. There’s something for everybody, farmers and city dwellers. We’re all in the same boat together.”
﻿

“Reflections of a Drought” can be seen on YouTube or at the end of this post. Future plans for the documentary include having DVD copies available for checkout at FCPL branches.


Waltmire’s goal for the project was to “foster discussion on how people can mitigate the effects of the drought.” What surprised him the most was “how complex water management in California is. There is no easy solution.”