WoW! on the Streets! 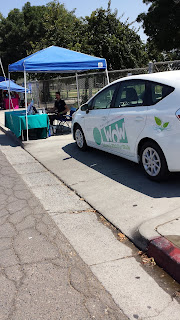 Jeremy Boriack, Literacy Specialist, works at the Library booth, next to one of the WoW!mobiles
at the “Bringing Broken Neighborhoods Back to Life” street fair on August 8.
The Fresno County Public Library’s WithOut Walls Library team shows up at many community events, raising library awareness. Saturday, August 8, WoW! partnered with  FCPL Literacy Services for a table at a “Bringing Broken Neighborhoods Back to Life” event on E. Hamilton Avenue, between General Vang School and Sequoia Middle School in southeast Fresno. 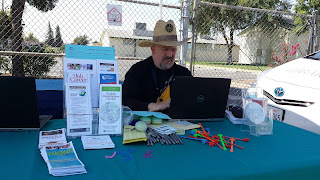 Terrance works at making a new library card while his solar hat keeps him cool.
The block party was a collaboration between several local churches, ministries, and the Fresno Police Department. It featured a bounce house, a dunk tank, a bungee run, musical entertainment by the First Men of Promise, nail-painting, and treasure-hunting. There were nachos, burgers, Frisbees, bread giveaways, and a visit from the Police Chief of Fresno, Jerry Dyer. 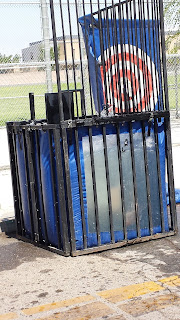 Somebody just got dunked!
WoW’s Terrance Mc Arthur and Literacy’s Jeremy Boriack made library cards, talked to more than 100 people, gave out library bags and information, and met with faith-based and community-based organizations.


Fresno’s efforts to build trust between the police, churches, and the community have been recognized nationally, including an article by The Washington Post. The FCPL WoW! team and Literacy are happy to be a part of the program.
Posted by Terrance V. Mc Arthur at 4:12 PM