National Night Out was a WoW!


What an event! Hundreds of people, entertainment, free food, crafts, information, and general happiness. Two WoW! teams of librarians were part of the fun.


Michelle and Jonathan talked to people at Quigley Park, near Dakota and Fruit Avenues.  A blood drive, bands, car show, and a talk by Fresno Police Chief Jerry Dyer were featured. The Fresno County Public Library table had flyers and library card applications, and Michelle and Jonathan pointed people across the street to the Gillis Library, less than a block away. 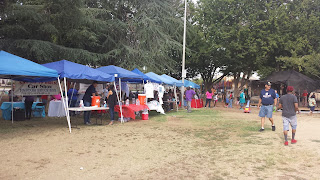 On National Night Out, Quigley Park was a happening place.


Shannon and Terrance made seven library cards at El Dorado Park and Wesley Methodist Church on Barstow Avenue, west of Bulldog Stadium. They demonstrated the library website, gave out flyers, and explained library services. Dancers, rappers, singers, and a movie entertained the crowd. Chief Dyer stopped by the library table for a photo opportunity. 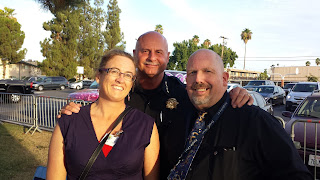 Shannon and Terrance with Fresno Chief of Police Jerry Dyer.
National Night Out helps build police-community bonds, promotes an anti-crime attitude, and brings neighborhoods together. Over 16,000 communities in the USA, its territories, Canada, and military bases participate. It was fun for the WoW! librarians to be a part of the celebrations.
Posted by Terrance V. Mc Arthur at 1:22 PM