In Honor of World Refugee Day: a Special Ceremony for New Americans

Once a month at Valdez Hall, a very important ceremony is held for new Americans: more than 800 people take their Oaths of Allegiance, becoming naturalized U.S. citizens. (Naturalization is the process by which U.S. citizenship is granted to non-citizens.)

But on June 20th, in honor of World Refugee Day, a special naturalization ceremony took place at Fresno State’s Satellite Student Union. The event was the culmination of months of organizing and planning by the Citizenship Academy and partners of the Central Valley Network for Integrating New Americans (CV-NINA). CV-NINA partners include the Maddy Institute of Fresno State, Fresno Adult School, the Fresno County Public Library, Proteus, San Joaquin Valley College of Law and Mi Familia Vota.

Doors opened at 8 a.m. Before the actual oath ceremony, entertainment was provided by the Polynesian Club of Fresno, the Hmong Cultural Voice Dancers and the CSU Fresno Folklorico. The Boy Scouts of America Troop 35 provided a color guard and a CSU Fresno Brass Quintet played the National Anthem and “America the Beautiful.”

Joining the ceremony were special guests Congressman Jim Costa, Councilwoman Esmeralda Soria, and CSU Fresno Professor Mark Keppler.  Each guest spoke about the importance of being a nation of immigrants and the rights and responsibilities of becoming a U.S. Citizen (vote!).

At the end of the ceremony, new citizens received their Certificates of Naturalization.  Normally, at the large ceremony downtown, this means waiting in line with the other 800 or so new citizens. But for this special ceremony, each person was given individual attention, walking onto the stage to receive the certificate and shaking hands with the distinguished guests—an extremely special moment for the new citizens and their families.

The day was a huge success and would not have been possible without the hard work of Ana Melendez from the Maddy Institute, Lisa Agao of the Fresno Adult School and Michelle Gordon of the Fresno County Public Library, as well as the 40 or so volunteers (from many of CV-NINA’s partners) who helped with all aspects of the ceremony. 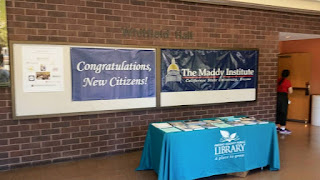 The Fresno County Public Library is proud to be a partner in the Central Valley Network for Integrating New Americans. In addition to this partnership, FCPL offers a number of services to support new Americans including citizenship materials and practice civics tests on our Learning Express databases. Call or email us for more information about these services.
Posted by emily.campbell at 12:02 PM